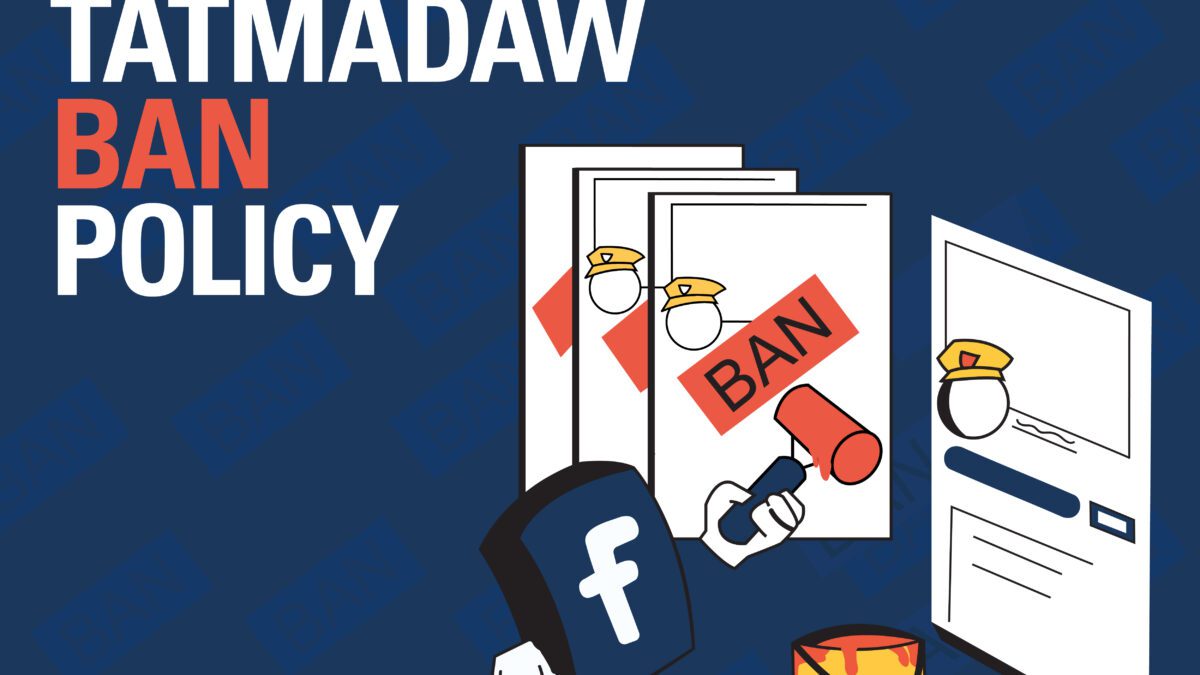 On February 24, 2021, three weeks after the Myanmar military took power in a coup, Meta took an unprecedented decision – it set out to ban military-controlled state and media entities from Facebook and Instagram.

The Tatmadaw Ban Policy, as it has come to be known, is unique in that it marks the first time a social media company has enacted a policy which explicitly foresees the restriction of state-owned assets.

Though this policy is consistent with Meta’s 2018 ban of several Myanmar military actors, these previous bans had been ad-hoc and carefully designed to avoid targeting state entities.

This new development sets an interesting precedent which raises important questions over how tech companies should approach state-owned assets in cases of illegitimate takeover.

The purpose of this article is to document the Myanmar Tatmadaw Ban Policy experience, with a particular focus on its scope, how it came about, how it was enforced, and what practical considerations the company ran into as it sought to design and implement this policy. The intention in recording this experience is to trigger further discussions around how tech companies should handle state actors and state-affiliated assets, as the legitimacy of the state becomes challenged.

This policy is unique insofar as it foresees the takedown, by a corporate actor, of assets owned by a state on its platforms.

Meta justified the introduction of its Tatmadaw Ban Policy based on its belief that “the risks of allowing the Tatmadaw on Facebook and Instagram [had become] too great” based on “events since the February 1, 2021 coup, including deadly violence”. It listed four guiding factors as underpinning its decision to restrict military-controlled assets, which spoke to the military’s association with human rights abuse, both online and offline, with past, present and future implications:

Meta did not explicitly address its decision to restrict official state assets in its blog. It did acknowledge, however, that state assets can play an important role in the provision of public services, and carved out an exemption for ministries it deemed to be involved with essential services, citing the ministry of Health and Sport, and the Ministry of Education as examples.

As the company expanded the scope of its policy to military-controlled businesses, in December 2021, it justified its decision by referring to “extensive documentation by the international community of these businesses’ direct role in funding the Tatmadaw’s ongoing violence and human rights abuses in Myanmar, […] escalating sanctions imposed by the US, EU, and other governments, and  […] painstaking reporting by civil society and human rights organizations.”

They were at least two additional factors which likely contributed to Meta’s decision and the speed with which it was enacted:

On August 28, 2018, Meta had indefinitely banned the Commander in Chief of the Myanmar military, Senior General Min Aung Hlaing, along with the military run Myawady television network and an additional 18 military-affiliated actors and entities. Though it lacked any policy framework covering state actors at the time, Meta had justified its decision by referring to the UN Fact-Finding Mission’s (FFM) report, which had “found evidence that many of these individuals and organizations committed or enabled serious human rights abuses in the country”, citing the decision as necessary “to prevent [banned individuals and entities] from using [Meta] service to further inflame ethnic and religious tensions.”

In the days following the 1 February 2021 military coup, the Myanmar military junta imposed legal restrictions on Facebook and Instagram services in Myanmar. On February 3, 2021, the junta issued a directive to all mobile operators, international gateways and internet service providers to block Facebook. This directive was followed by another directive dated February 4, 2021, which expanded the restrictions to both Instagram and Twitter. Though neither of these directives were made public, Telenor Myanmar publicly disclosed having received both orders here and here.

Though the Tatmadaw Ban Policy gave Meta substantial scope for enforcement, the company has been very cautious in designating entities under this policy. Our analysis suggests that the company went through several phases in its enforcement, reflecting a continuous refinement of its thinking and approach:

In the hours following the policy announcement, Meta took action against a number of state and media assets, which were directly affiliated with the military and had historically been under the control of the office of the Commander in Chief. These included the Facebook and Instagram presence of military spokespeople, the Tatmadaw True Information Team, and the official presences of the Ministry of Defense, the Ministry of Home Affairs and the Ministry of Border Affairs. Besides taking down the official presence of these actors, Meta restricted the sharing of a number of their affiliated websites.

Meta’s enforcement was quickly expanded to a number of communication actors, which had previously been under the control of the civilian government. These bans were enacted over the course of several weeks, and included the official presence of the Ministry of Information (MoI), the Information and Public Relations Department (IPRD) and state-owned media.

Phase 3 – Expansion to other state institutions and agencies

As the military gained control over more digital state assets and started to capitalize on these assets for propaganda, Meta expanded its enforcement to a set of additional ministries and agencies. These included the official presences of the Ministry of Social Welfare, Relief & Resettlement, and several assets associated with the Myanmar Union Election Commission.

In December 2021, Meta also responded to reports that the military was materially benefitting from the presence on Facebook of its business interests by expanding its policy and subsequent enforcement to military-controlled businesses.

As it went about enforcing its decision, Meta ran into a number of practical considerations. These surfaced some important questions, which the company wrestled to answer.

Meta enacted its Tatmadaw Ban Policy to prevent the Myanmar military from materially benefitting from Meta’s services, including through representation. But what exactly constitutes representation? Restricting all soldiers would be an overreach, insofar as they should be entitled to use the services in a personal capacity, but what if they use their account, or specially created accounts, for institutional goals and in a professional capacity? Should these accounts be considered ‘military-controlled’ and serving a ‘representation’ function for the military? What about the thousands of civil servants and media actors working for military-controlled government and media entities? If their accounts, or the assets they set up and manage, are predominantly used to distribute content developed by or with the explicit purpose of supporting the military’s ‘representation’ on the platform, should these be considered military-controlled? Meta’s original approach was limited to the official presence of banned entities, but it was inevitably faced with the fact that the accounts involved in running these presences continued to re-establish new assets, including covert ones, as part of their professional activity.

When rolling out its Tatmadaw Ban Policy, Meta explicitly carved out an exemption for “government ministries and agencies engaged in the provision of essential public services”. But what constitutes “essential public services”? And how should these be weighted against other safety considerations? What if the ministries or agencies engaged in the provision of public services also engage in propaganda activities? Or leverage Meta services to target groups and individuals? How are these considerations to be assessed and balanced? Meta argued that the Ministry of Social Welfare, Relief & Resettlement violated its internal balance, resulting in the ban of its Facebook page, but it elected to keep most other ministry pages, including the page of the Ministry of Foreign Affairs up, despite that ministry’s overt engagement in harmful propaganda.

As detailed in our ‘Digital Coup’ contribution, the Myanmar military faced some active resistance when attempting to take control of the social media accounts of the state. In several cases, the resistance appears to have come from admins from the previous administration, who cut the junta’s access or unpublished assets, upon joining the Civil Disobedience Movement. In a few of these cases, the junta appears to have regained control, weeks or months into the coup, raising important questions as to how the military regained control over these assets. Did it target individuals it knew to have had admin access? Were these individuals subjected to torture? Was anyone killed over admin credentials? What responsibilities do tech companies have to mitigate these risks?

In its response to the Myanmar coup, Meta acknowledged that the Myanmar military has substantial commercial interests, which materially benefit from using its services. As it rolled out its Tatmadaw Ban Policy, it first restricted the purchase of ads by “military-linked commercial entities”, and eventually amended its policy to prevent the representation of “military-controlled businesses”. In both cases, Meta referred to the UN Fact-Finding Mission on Myanmar report on the economic interests of the Tatmadaw as the reference guiding its decision and enforcement. This was an important acknowledgement from the company, but it remains unclear how Meta ultimately applied its restriction. Did it restrict all of the businesses referenced in the UN report? How did it go about confirming the authenticity of the associated assets? And what difference, if any, did it make in its reference to “military-controlled businesses” and “military-linked commercial entities”?

Another important consideration, when dealing with state-owned assets, is in determining the ownership of the data. Should data produced by public institutions be considered a public good? In this case, it’s unclear whether Meta retained the data associated with the state assets it deactivated under its Tatmadaw Ban Policy. If it did, how long will it retain the data for? and under what conditions will it return it to the people of Myanmar? The question of data retention also applies to the assets which remain under the control of either the democratic opposition or the junta. It’s unclear whether Meta has any policy or protocol in place to prevent these parties from permanently deleting the data associated with these assets. Given the public interest nature of this data, should it be expected to?

Meta’s response to the military coup in Myanmar set a global policy precedent for corporate restrictions on state-owned digital assets. In doing so, it raised some important questions regarding the use of private tech infrastructure by state actors. If tech companies are to host digital state assets, what responsibility do they have to the citizens of these countries? How should they navigate illegitimate government takeovers? Do they have a responsibility to act as custodians of state assets? And what should that look like in practice?

Meta’s attempt at defining – and enforcing – its Tatmadaw Ban Policy in Myanmar provided some elements of answer, but also surfaced an array of important questions and considerations which still need to be critically reviewed and assessed in order to inform future corporate responses to illegitimate government takeovers moving forward. 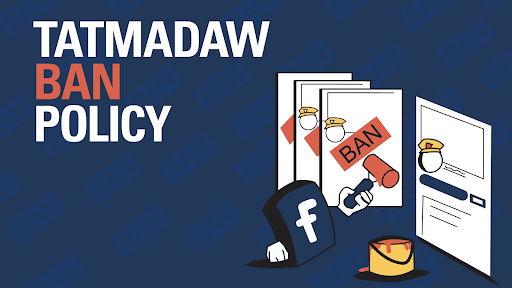